Andy and I spent the weekend beautifying (or should I say - Ikea-fying) our apartment. We both love the area we live in, I've been here for 4 years now. What we don't like is the size of our apartment. For the minuscule amount of rent we're fortunate enough to pay, we put up with the size. I don't have any before shots. Those of you that have been to my apartment will hopefully see the improvements.

I HATE the kitchen in this place. It is soooooo small. And the floor is falling apart. It used to have a fold down table (basically where the wire shelving is). On the weekend we came up with the awesome idea of taking off the table (which we can put back when we move out) and rearranging. We've now got a lot more space in the kitchen; floor, storage and bench space, thanks to our new Ikea trolley. 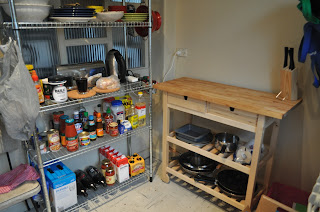 We also did a bit of a makeover on Andy's computer area. We bought a new desk. It used to be piled high with boxes too. So much nicer. 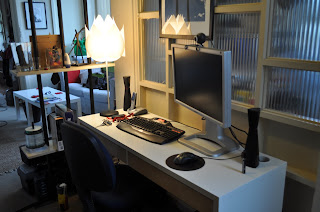 The rest of the place we spruced up a while back, but I'll show it off anyway. Excuse the vacuum cleaner and the washing, LOL. You slide open the middle doors for the TV. 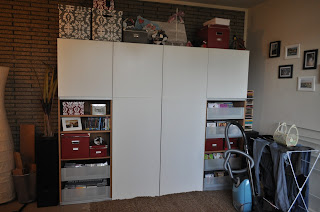 Next on the agenda will be the bedroom. I would love a new bed!
Posted by Katie at 6:24 PM 3 comments:

This is my first ever tag! Exciting!! The beautiful Kat tagged me. I'm supposed to tag 7 other people, but I don't know 7 other people to tag! LOL


1. What is the last book you read, did you like it?
Hrm, last book I read. To be honest I don't read a whole lot. Not as much as I should. The last book that I "read" was an audio book (does that count?) and it was 'Tomorrow, When the War Began' by John Marsden.

2. Do you have any travels planned in the near future, where to?
I would love to go travelling again. Not sure when and where it will happen though. I'm going to buy a car (next week hopefully) so maybe a road trip is in order.

3. Do you prefer tea or coffee?
Peppermint tea from T2. Only tea I drink. The smell of coffee makes me want to spew

4. Where were you born?
At the Box Hill Hospital in Melbourne.

5. What is your favourite work of art?
I'm so naive when it comes to art. I don't really have a favourite.


6. What is your favourite breakfast food?
Scrambled eggs and bacon on toast from Krakatoa in South Yarra. Mmmmmmm! 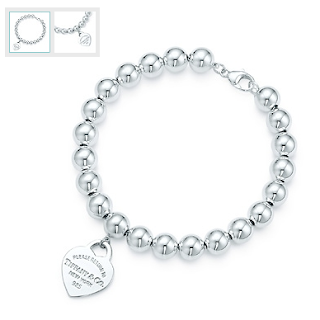 That was fun! Anyone that wants to do the same questions that I did can go ahead and tag themselves!
Posted by Katie at 9:05 PM 2 comments:

Don't tell my sister, but I'm making her a travel wallet for her birthday. It's like the one I made for myself earlier in the year.  I'll take proper pictures when I'm done, but here is a crappy one for now.

So my old 1988 Honda decided to pack it in on Friday night. Was turning into my street and noticed that the temperature was climbing. Pulled into the driveway and turned the engine off. Next thing I knew all the coolant was pouring from underneath the car and across the driveway. Called the RACV and after about a minute he said it was most likely my head gasket. I don't know much about cars, but I know head gasket = $$$. That has lead me to make the decision that it is time for a new car. This and the fact that:
There are heaps of other things wrong with it, but they are the things that annoy me the most.
I've decided that I would like to buy a new car. This is something that I'm very excited about. I'm not 100% decided on what I want yet. On Saturday we went and looked at lots of cars (new and second hand) and took a few for a test drive.
At the moment I'm leaning towards a Corolla.

I haven't looked at a Mazda 3 yet, but I was thinking about checking it out too. We test drove a Ford Fiesta (fun, but very cramped) and a Nissan Micra (no guts). I would love to get a VW, but I can't afford a new one and all the second hand ones are in awful condition.
I fell sick at the prospect of spending that amount of money, but I know it will be money well spent. I have about half saved, so while I would have to take out a loan, it wouldn't be too big.
Posted by Katie at 6:26 PM 5 comments: